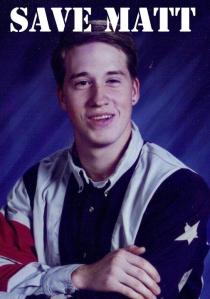 While there is no direct connection between the two people pictured above.  They both deeply ask the question about justice.

If nothing changes, Matt Puckett (above left) will face death by lethal injection at 6pm (ct) in Mississippi.  This pains me deeply!  In my opinion, this is a violation of justice and even more difficult because he did not receive a fair trial.  Lord have mercy.

Amongst the healthy conversation I have been having about justice, both online, and in person, there is one question seems to come at me with a terrible honesty; “what happens when the crime is personal?  What happens when it’s someone you love and care for?”

For my wife’s family, justice is personal.

My wife, Katrina had a cousin named Candace (above right) who was murdered in the blustery cold of Winnipeg in 1984.  Thirteen year old Candace was found tied up in a shack not far from where she went missing.  She froze to death.  It feels extremely impotent to even write about it’s impact on the family, but it was awful.  For about 22 years they had no idea who did it.  Then finally, after those 22 years, they finally had a name and a face with which to attribute this horrendous crime.

Cliff and Wilma Derksen, Candace’s parents, had a choice to make.  While they never had to face questions about death penalty (because we do not have it here in Canada and they would never want it anyway) they were still faced with the a similar internal wondering about what justice looks like for someone who murdered their child.  They were at a cross roads if you will.  Do they travel the path of anger, retribution, bitterness and call it justice or, do they walk the even tougher road of grace, peace, mercy, and attempt a seemingly impossible forgiveness.

I could write endless words speaking of their story, how it has inspired my wife and I to strive after the dynamic heart of God in ways otherwise unimaginable.  Yet there is much more value in you hearing it for yourself.  About a month ago, Wilma spoke at an independent Technology Education Design (TED) conference in Winnipeg, Manitoba, Canada.  Below is the talk.  Be inspired, be prepared to think of grace and forgiveness in such a counter cultural way that it can only be divine in nature.  WATCH THIS VIDEO.  It is with sincere humilty that I offer it to you.  It’s 16 minutes.

What does justice look like in the midst of forgiveness?  What if everyone took the difficult road that the Derksen family dared to travel?